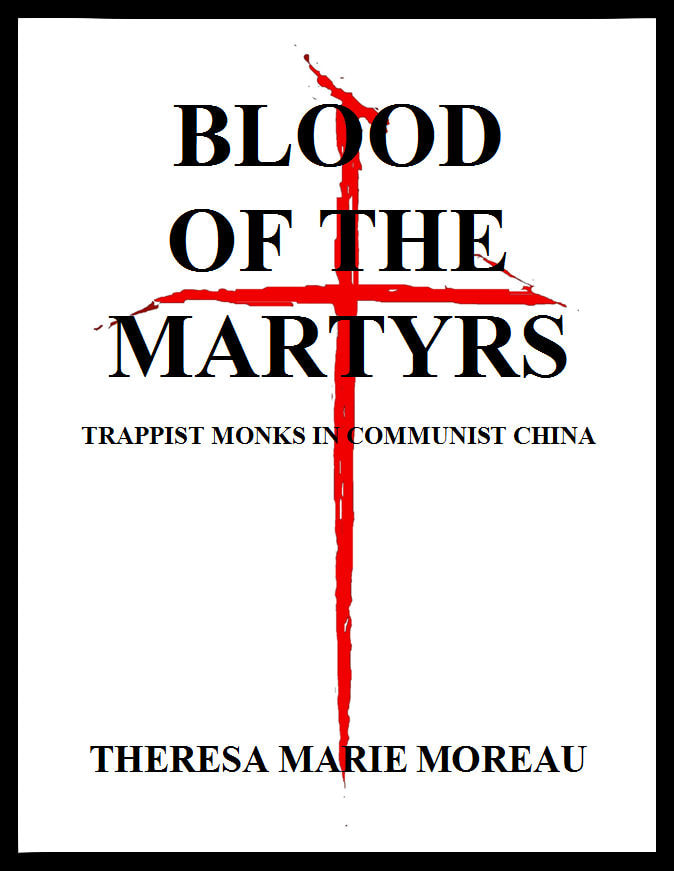 Blood of the Martyrs: Trappist Monks in Communist China by Theresa Marie Moreau; 187 pages, available on Kindle and limited hardcover at Amazon.com.

Blood of the Martyrs details the persecution of a group of Cistercian monks following the establishment of the postwar Communist government in China, a government determined to destroy all traces of Christianity in the country.

It makes for instructive reading in the light of the recent agreement between the Vatican and China regarding the appointment of bishops in the country, and the growing persecution facing Catholics and Christians generally there under the increasingly authoritarian regime of Xi Jinping.

The story of the hardships and martyrdom of these mostly Chinese religious was concluded in the late 1940s and early 1950s, but it began over sixty years earlier, when a French Trappist monk visited Yang Kia Ping valley, in northern China, in June 1883, and decided that this desolate place, 75 miles west of Peking, would be the site of what would be called the abbey of Our Lady of Consolation.

After a slow start the community began to grow, attracting many vocations, and by 1928, it was able to open a daughter house, Our Lady of Joy, 190 miles southwest of Peking. This likewise prospered, despite the penitential life for the monks of scant food, hard labor, and perpetual silence.

As the thirties progressed, the monastic life was peaceful, but the country itself was in turmoil; initially, though, the Communists treated the monks with respect. But as time went on, petty harassment grew, from intrusive searches, to demands for food and money, to open hostility.

By the early 1940s, the whole community had been placed under house arrest, as Mao Zedong’s forces tightened their grip on that part of northern China. After the war, once Mao’s Nationalist opponents had been driven onto the island of Formosa, now Taiwan, the Communists turned their attention to what they described as “counterrevolutionaries,” a category which included the monks, who were classed as “major enemies” of the people.

The real martyrdom of the monks began in 1947, when the Communists initiated a program of open agitation against them, which culminated in a mob attacking the abbey and ransacking it. Then the 75 monks, the majority of whom were Chinese, were arrested, and brought before a howling mob of local peasants, who had been whipped up into a frenzy.

Several of the leading monks were questioned and repeatedly clubbed if their answers were not the expected ones. Then the whole community was brought before a People’s court, and many of its members were mercilessly beaten so as to extract confessions from them.

It was then decided, in August 1947, to move the monks, and this was the beginning of what would be a “death march” for many of them. They had to carry heavy loads, although their hands were cuffed, and quite often their feet were weighed down with chains, as they made way along tortuous mountain paths. They were forbidden to rest and kept moving with threats and ill treatment. The weather was often inclement, with the monks having to battle through torrential rains and wind.

Some of them, such as Fr. Seraphinus Shih, were singled out for particularly brutal treatment. He had remained constant in the faith, and the Communists hated him for it, and beat and tortured him relentlessly.

As the march went on, more and more of the monks succumbed to the brutality of their guards and the atrocious conditions they had to endure, and were buried in shallow graves along the way. The others reached a village called Teng Chia Yu, but because of the international outcry over the religious persecution, some of them were allowed to go to Peking/Beijing. But of the others who remained, some were poisoned.

The foreign monks were often treated as harshly as their Chinese brothers, and many of them suffered from dysentery, and, as the year advanced, from the harsh winter weather. One by one they died from exhaustion and ill treatment, and in early January 1948, half a dozen of the remaining monks were taken before another people’s court.

They had all endured six months of agonizing tortures, beatings, and ill treatment, and now the “blood-encrusted, lice-infested men, wearing rags caked in their own filth” were condemned to be executed on false charges. They were shot and their bodies thrown into a nearby sewage ditch.

Their confreres at Our Lady of Joy monastery had likewise to suffer much. In April 1947, fleeing the violence engulfing the country, they had had to leave their monastery and seek refuge in Szechuan. Some of the monks from Our Lady of Consolation monastery had been released and moved to Beijing and stayed there, as over time, more survivors from the death march joined them.

Meanwhile, in August 1948, the resurgent Communists threatened Beijing, as the three last survivors of the death march reached the city. Finally, in early 1949, Beijing fell to the Communists. Only a small number of the monks of Our Lady of Joy managed to escape to Hong Kong, but of those seven finally made it to the United Sates.

Those who remained in Szechuan were imprisoned by the Communists in February 1951, but later released, although three priests were kept in detention, where they were repeatedly interrogated. They were asked the question, “Does man come from monkeys or from God,” and if they answered, “from God,” they were beaten. Two of them eventually died because of their ill treatment, but one was released.

From this point on, the Chinese government began to promote their own separatist church in the country, as a breakaway movement from the Vatican, and so a new type of persecution began. The faithful bishops in China sought guidance — should they leave the country or remain?

The papal nuncio for China, Archbishop Antonio Riberi, asked Pope Pius XII on their behalf. His reply, quoting from St. John’s Gospel, was, “The good shepherd lays down his life for the sheep.” And then, quoting from the Book of Acts, he repeated the words of Christ: “You shall be my witnesses.”

So the course to be followed by the Chinese bishops was set by the Pope — they should remain with their flocks even if it meant martyrdom. The word martyr, of course, comes from the Greek word for witness.

For the remaining Trappists, the suffering continued, and in September 1954, after six more months of interrogation and torture, the priests among them were sentenced to long terms of imprisonment in the “laogai,” the system of penal labor and prison farms in Communist China.

Then the Bamboo Curtain descended upon China as its people were cut off from the outside world for many years.

The heroic witness of the Trappist monks of Our Lady of Consolation and Our Lady of Joy has been beautifully captured in this book, which is a well-researched and often moving account of the brutal treatment and brainwashing which they underwent in their struggle to remain faithful to Christ. It is good to have such a reminder of what that fidelity has cost some of our fellow Catholics.

(Donal Anthony Foley is the author of a number of books on Marian Apparitions, and maintains a related website at www.theotokos.org.uk. He has also a written two time-travel/adventure books for young people — details can be found at: http://glaston-chronicles.co.uk/.)

I believe that the merit of this volume is its conciseness and fidelity to the written accounts by witnesses and survivors, and to hearsay. One important aspect is the author’s clarity regarding which monks were martyrs of Our Lady of Consolation and which monks survived the Death March.

I believe an added feature is the numerous pictures of almost all the monks who were martyred at the hands of the Communists.

One more interesting note is the description of an interview, on pages 128-32. The monks upheld that God had created the world and humans, while the Communist doctrine upheld that “Labor created the world” and described “the part played by labor in the transition from ape to man.”

The appendix contains ten maps of Our Lady of Consolation, the Death March, Our Lady of Joy in its various locations, and Evacuation and Escape Routes.

One last observation: the front cover of this book is simply white with black lettering, and on the back cover is a simple red cross. There are no biographical remarks on the author, only a picture of her on the back flyleaf. Are these not examples of Cistercian simplicity and humility?

I am very grateful to have read this book. Because of it, I came to a greater knowledge and understanding of our Chinese monks and the terrible suffering they endured for the love of God and their brothers.